I’m spending spring and summer 2020 completing the score for Giant and am working with Britten Pears Arts towards a full production – details to coming soon.

As part of the Snape Music Festival of New in September 2018, I presented this ten minute video of work in progress on Giant.

Synopsis: the betrayal of Charles Byrne

This new chamber opera tells the story of surgeon John Hunter and his obsession with Charles Byrne – a man he would ultimately betray in one of the most disturbing acts in the era of the grave robbers.

Charles Byrne (1761–1783), ‘The Irish Giant’, was considered a living wonder, a freak, a gentleman,  a fine performer, an ‘ill-bred beast’ and a person who held within his bones secrets which anatomists longed to understand. When Charles exhibited himself in London as a piece of living art, John was smitten by his extraordinary physique. He visited Charles after a show, offering him money, medicine and friendship. Charles saw John as an ally but John was actually after a trade: In return for money and attention, John wanted sole access to Charles’ body after death so he could dissect it and put it on public display.

Living in terror of this fate Charles refused John’s request and paid undertakers to keep his body safe. They promised to seal his corpse in a lead-lined coffin, carry it to Margate and drop it in the sea. But when Charles was on his deathbed, John sent an accomplice to spy on him and intercept his funeral procession. Unbeknown to the mourners, the coffin dropped into the sea at Margate contained nothing more than rocks. The corpse had been stolen. It was brought back to London then boiled to strip the flesh from the bones.

It took many years for John Hunter to admit he’d stolen Charles Byrne’s body. He revealed this in stages, first in cryptic letters to friends (‘I have a tall man, I can’t wait for you to see him’), then within a portrait, in which he instructed the painter to depict two long legs in the shadows. Some years after Charles’ death, John put the skeleton on public display. It continues to be exhibited today.

It’s debatable how much public prurience, professional vanity or the desire for medical progress prompted Hunter’s betrayal of Byrne – the tragedy at the heart of this opera. Byrne’s skeleton remained on public display until 2016 when the Hunterian Museum closed for refurbishment. We’re waiting to hear if Byrne’s wishes for a sea burial will finally be honoured when the museum reopens in 2021.

Giant is my first opera. A draft libretto has been written by Ross and the piece is directed by Sarah Fahie who has been working with us both, from an early stage, to help us shape this into a compelling piece of theatre. This chamber piece is for four singers (soprano, alto, tenor, baritone) and five musicians, one of whom is also manipulating electronics live. Viola da gamba, clavisimbalum and percussed handbells are in the mix and all the instrumentalists are on stage throughout the opera. This is a piece about the bones of something so I want people to see the instruments, the bones of the music itself. I’m also deploying some of my robotic musical instruments on stage (e.g. the automatic polyphonic carillon). I’m using these to place Byrne, the living wonder, in a hall of mechanical curiosities, rather like Cox’ Museum in eighteenth-century Piccadilly.

In line with my other compositions, I’m tightly coupling notated music with bespoke live electronic processing – techniques I’ve devised to augment the expressive possibilities of the music. I’m excited to be putting this bespoke electronics on stage, techniques I’ve refined over many years of live performance as an electroacoustic performer. Here, they enable us to bring a new sonic palette to opera. I use electronics to get inside sound and pull it around like liquorice to create moments of stasis, sickness and dissassociation (Byrne had frequent migraines), or a sense of an action that needs to be undone. I see electronics and robotics as part of my compositional process, as much as any notated work. I’m always seeking ways to use these sonic capabilites narratively – they help me to express what can’t necessarily be articulated in words.

I also use everyday items from the world of Byrne and his associates as sounding objects in the score. For instance, in the video, you can see teacups, pestles and other items being stirred ritualistically, presaging the horror awaiting Byrne’s corpse in the anatomist’s boiling pot.

Unusually for opera, I brought in director Sarah Fahie from the earliest stages of this piece’s development to work closely with the Ross Sutherland (librettist) and me. I had a keen idea of the complexities involved in telling this story in opera and felt I needed the input of a director with Sarah’s expertise to acheive the necessary somatic understanding of the piece. At the earliest stage embodied the narrative (i.e. acted it out, as a makeshift play) to work out how to pace scenes, moment by moment – this helped me to tell when I needed to push the music forwards, when to have moments of stasis, when to be fierce, introspective, serene or chaotic. It’s also helped me to fathom how to characterise the main protagonists in this story, each of whom has their own subtleties and complexities which needs to be reflected in the music. Through this process, we’re making opera where sound, narrative and action are tightly interwoven.

In a formative workshop, we took the unusual step of acting out an entire storyboard before we had any music or libretto. The narrative we used emerged from Ross’ outline structure and from our collective improvisations (we worked with the singers and actors you see in this video, all of whom were very open to this devising process). In it, we made time and space for certain ‘flashbulb’ moments I wanted to score. Some of these were narratively lead (e.g. the opening scene with Hunter dissecting his own dead child), although many were equally driven by my own musical imperatives (e.g. the desire to have a moment where mourners promenade with the coffin – a scene reminiscent of the feeling of the funeral procession in Blow’s Venus and Adonis). From this, we acted out the entire show, rather like a Passion play, lead by our instincts to find the essential elements and turning points of the story. This collaborative telling was invaluable as Ross wrote the libretto and I embarked on the music.

Sarah Fahie and I are continuing with this process as I tackle each scene. Our working method is yielding promising results. It’s one we’d like to investigate further in this and other pieces. 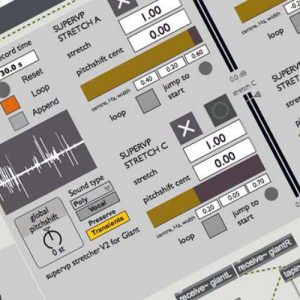 Early R&D work on Giant has been generously funded by a Jerwood Opera Writing Fellowship and by Snape Music – both of whom have also given me invaluable practical and professional support since 2016.