Background - why the interest in infrasound?

Design of the pipe

Critique of the 'resultant technique'

Infrasonic (aka Soundless Music) was a controlled psychological experiment, in the form of two back-to-back concerts. These concerts were highly unusual because some of the music was laced with infrasound (extreme bass sound, below 20Hz in frequency). It took place in the Purcell Room, London, in 2003.

…the universe is probably full of music that we cannot perceive”

Sir John Lubbock, considering the limits of the audible spectrum, 1879 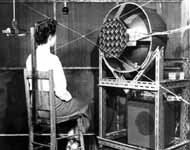 Background – why the interest in infrasound?

I became interested in infrasound in 2003, as I’d learned about a number of tantalising and possibly connected occurences:

Infrasound is a sound so deep, it’s on the cusp of perception. Technically, infrasound is a vibration below 20Hz. Many classic school physics books say we hear sounds between 20Hz and 20kHz, suggesting we don’t perceive infrasound at all. But  we do actually sense infrasound  – it’s a sensation that we feel as much as hear. Infrasound is the deep rumble of heavy traffic that is generally thought of as an annoyance in the city.

Given that infrasound is often described as barely perceptable ‘junk’ sound, it’s fascinating to discover that many large churches and cathedrals around the world have bass organ pipes that are so long, they create notes at infrasonic frequencies. Pipes this long have been made since the time of Bach. Infrasonic pipes are used in sacred music and there is debate about why they are used. Some people say infrasound enhances a sense of awe. At moments of climax in the music, it adds a (psychologically) electrifying vibration to the room, a sensation that puts a shiver down the spine. Others say that giant organ pipes are nothing more than room dressing – they are simply there to give the organ a grand appearance.

Stranger still, in 1998 a physicist Vic Tandy found infrasound from a mundane source (a faulty ceiling fan in a corridor near his office) was creating sensations that gave him such a sense of unease, he felt as though he was in the presence of a haunting. This lead him to search for and find infrasound in other ostensibly haunted sites. Could infrasound account for some of the strange experiences reported at these sites?

Looking at these (and other) instances of infrasound, it seems this extreme bass sound may be implicated in some eerie psychological effects – sensations classically associated with the experience of a ghost or a haunting. As a musician, I found this a tantalising prospect. If these effects could be confirmed and controlled, it may be possible to laced music with infrasound to create a new pallete of eerie and unsettling psychological effects.

By 2003, I was certain I wanted to explore the effects of infrasound – and I realised I needed a team of experts in psychology to design any experiments. So I contacted parapsychologists Richard Wiseman and Ciaran O’Keeffe. I also contacted acoustic consultants from the National Physical Laboratory (Richard Lord and Dan Simons) as I needed to produce pure infrasound at levels high enough to flood a concert hall. I  worked with the pianist Genia who would perform live on the night. We brought in a number of other composers and artists to create a programme for an experimental concert. Our aim was explore the tantalising claims about infrasound in a musical setting and put them under scientific scrutiny.

Together, we set up Soundless Music, two counterbalanced experimental concerts in the Purcell Room, London. These took place within 90 minutes of each other on 31 May 2003. The same music was played in both concerts but each concert was laced with infrasound in different pieces. Neither the performers nor the audience were told when the infrasound was present. If it appeared in pieces, 2, 7 and 8 in one concert, for example, it appeared in pieces 3, 5 and 6 in another. The only person to know when the infrasound was present, Ciaran O’Keeffe, was (literally!) locked away in a cupboard for the entirety of both concerts.

At certain points in the concert, the audience were asked to fill out questionaires to report on any feelings they had during previous pieces. They were also asked to report on how excited/bored they were during the pieces.

The counterbalancing was an important element of the parapsychologists’ experimental design. Everyone attending was buying a ticket because they knew we were working with infrasound – and the publicity suggested we were dabbling in the realm of ghosts. So there was likely to considerable priming and suggestion at play – the audience were expecting something unusual to happen. However, no one, apart from Ciaran, knew when the audience were experiencing pieces laced with infrasound and when they were not. Thus, we could expect to see increased reports of strange sensations during the concert. But if those reports were always more prevalent, more marked or more consistent in nature during the pieces laced with infrasound, then we may have evidence of an interesting effect.

Our results were tentative and our statement about the project were based on an analysis of the results by Richard Wiseman and Ciaran O’Keeffe. I need to leave the details of the statement to the parapsychologists but the summary is: when the infrasound is present, people did report more feelings of unease, a sense of presence. And there is tentative evidence that this is the case, even among audience members who weren’t aware of the presence of the infrasound. It was a tantalising but inconclusive result – and I would love to take this research further.

A year after this experiment, I took a masters in biologically-inspired robotics in the COGS department of Sussex University. Among many other things this masters gave me confidence to design my own psychoacoustic experiments. I have many ideas for follow-up research and would love to find funding and a pocket of time to follow them up.

The Pipe – and a critique of the resultant technique

I’ve had many enquiries about the infrasonic pipe we created for this experiment and have written up a few details on separate page.

On this page, I’ve also included a critique of the resultant technique for infrasound generation. It’s a time-honoured way to create infrasound but I find it hugely problematic for anyone investigating the psychological effects of infrasound. A number of subsequent research experiments into infrasound’s reputed effects have, in my opinion, insufficiently addressed this issue.

This experiment was put together in 2003 with a small but very welcome grant from the SciArt Consortium. Since then, I’ve been endeavouring to keep these pages live while I’ve migrated to successive websites. As a full-time composer and musician, I conducted this collaboration as an independent scholar. I endeavour to questions about infrasound when I can – but please bear with me if I can’t answer extensive enquiries or respond straight away.

Our concert/experiment has attracted worldwide media interest. It’s also inspired many other artists and cognitive scientists to delve into these effects. Since our experiement, it’s also been great to see infrasound being used psychologically by many others working in film, opera, installations and more.

I do have many plans to take this work futher, both as an artist and as an experimenter. I’m just looking for the window of time – and the funding – to do so. In the meantime, some of my own learning from this experiment has been deployed in my music for theatre at the National Theatre, Manchester International Festival and beyond.

Richard Wiseman has written a very entertaining summary of the experiment and our findings in Quirkology, a book that’s packed with examples of curious psychology.

You can also a read my very early account of the project (written before we’d staged the concert) in Experiment: Conversations in Art and Science, a compendium of collaborations between scientists and artists, published by the Wellcome Trust.